Heart and Soul House of Beauty. 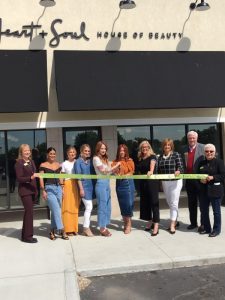 The Chamber, its Ambassadors, family, and friends joined Jessica Mullen and Erica Maloy to celebrate the grand opening of Heart & Soul House of Beauty on Tuesday, June 4.

Heart + Soul House of Beauty is a 1680 sq. ft. salon located inside the newly renovated Loudon Plaza in Albany and employs highly educated and skilled stylists and technicians for all of your hair needs. Services offered include custom color and haircuts as well as eyelash extensions, makeup application and bridal services both on and off location. Both Mullen and Maloy are working together to cultivate an atmosphere of creativity, teaming up with both staff and clientele to redefine the meaning of craft hair dressing. The salon will offer monthly classes instructed by Mullen and Maloy and will host traveling international artists with an open invitation to any local stylist to attend.

Says Mullen and Maloy, “It is time to redefine the modern salon and better yet, what the modern woman is looking for in her experience at the salon. We want to invite the boss ladies, the creatives, the lawyers, the baristas and everyone in between to join us in changing the salon experience.”

Jessica Mullen attended Sage College of Albany from 2008 – 2010 where she studied Fine Arts and Bagian dalam Design. In May of 2010 she enrolled in the cosmetology program at the Orlo School of Hair Design in Albany. In Sept of 2010, Jessica began working as a spa attendant and apprentice at Jean Paul Salon and Spas on Western Avenue. Beginning her career as a part time custodian/part time apprentice, Jessica quickly worked her way to the top. Having received advanced education from Goldwell as a Goldwell Color Specialist, KMS California, Bumble and Bumble as well as many online education platforms. Jessica also completed a course in branding and marketing through social media at Bumble and Bumble University in New York City. In July 2017, Jessica transitioned to 350 East Salon and Spa as a self-employed booth renter.

Erica Maloy attended the Make-up Designory in Burbank, CA in the summer of 2008 where she studied makeup artistry, hair styling and portfolio development to then become a Certified Makeup Artist. After moving back to her hometown in Upstate New York in 2009 to pursue her career in the beauty industry, she began freelancing and working full-time for Clinique. In the beginning of 2010 she was promoted as Counter Manager of Lancome. In October of 2010, Erica enrolled in Paul Mitchell The School in Schenectady to continue her journey in the hair industry. While attending Paul Mitchell, Erica left her position with Lancome and was hired as a Makeup Artist/Retail Specialist at Jean Paul Salon and Spas (Stuyvesant Plaza). In 2011, she became an Xtreme Lashes Directory Certified Stylist. She has also received advanced education from Goldwell as a Goldwell Color Specialist, KMS California, Bumble and Bumble, Oribe and numerous online education platforms. In July of 2017, Erica transitioned to 350 East Salon and Spa as a self-employed booth renter. Erica’s motivation and passion to never stop learning is what will continue to grow her success in the beauty industry.

“In an area where there are many upscale corporate salons, we really wanted to cater to the young, modern professional. We believe people go to a salon to look a certain way but people will also leave Heart + Soul feeling a certain way.”

Heart and Soul House of Beauty

How to Use Azazie Garment Bag